Figure 1 shows a heat sink in a sealed enclosure with the heat transfer modes identified.  The heat sink is oriented vertically in the enclosure as shown in figure 1. The heat generating components are assumed to be dispersed evenly through out the enclosure so that there are no areas where the air temperature varies widely from the average.

Figure 2. Thermal resistance network of a heat sink in a sealed enclosure

Rhs-conv,  is the thermal resistance due to convection from the heat sink to the air inside the enclosure.

accounts for the decrease in temperature between the base of the heat sink and the tip of the fins since all the correlations used to calculate the convection and radiation coefficients assume that the heat sink is at a constant temperature.

Reference equation 12 for the definition of hhs-rad.

is the number of heat sink fins

is the thermal conductivity of the heat sink material

is the density of air at Tair-hs

is the acceleration due to gravity

is the coefficient of thermal expansion for at Tair-hs

is the dynamic viscosity of air at Tair-hs

is the thermal conductivity of air at Tair-hs 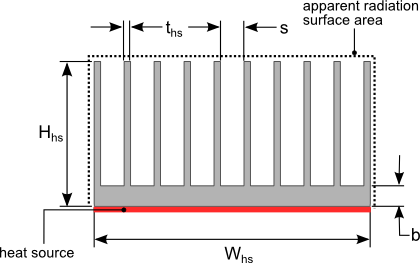 Rhs-rad,  is the thermal resistance due to radiation from the heat sink to the internal surfaces of the enclosure.

the total internal surface area of the enclosure13

is the surface emissivity of the heat sink

is the emissivity of the enclosure internal surfaces

Reference the blog article How to calculate the temperature rise in a sealed enclosure for the definition of Aend and Avert as well as the equations that define the thermal resistances associated with the enclosure surfaces.

In order to solve for the unknown temperatures at nodes 1 through 4 equations 14,15, 16 and 17 have to be solved simultaneously using a numerical solver. The Solver addin available in MSExcel can be used to calculate a solution. Equation solving software such as Matlab, MathCAD or Mathematica provide similar numerical solving capability. 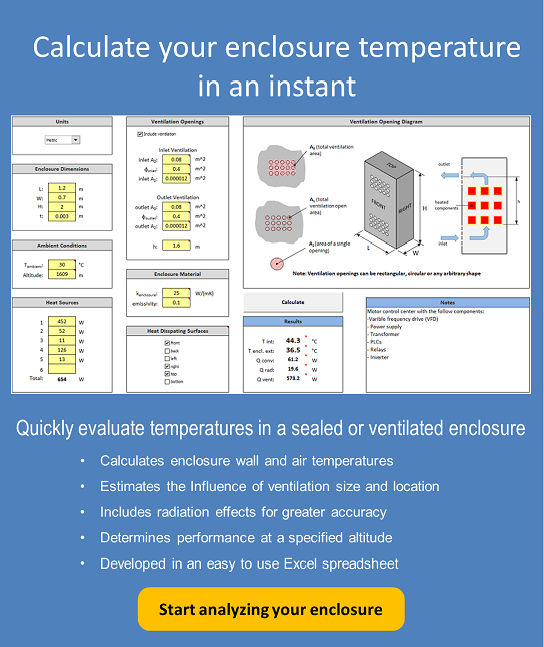 Do you need to calculate the temperature in a sealed or ventilated enclosure?