The equation for thermal convection resistance Rconv from the surface of a horizontal flat plate with the heated surface facing upward or downward  is given by equation 6.   The corresponding average Nusselt number, NuL for each orientation (equations 1 and 2), [1] are used to calculate the convection thermal resistance Rconv of each orientation. Using the procedure and equations described in the blog post How to design a flat plate heat sink and replacing the thermal convection resistance equation with equation 6 the performance of the flat plate LED heat sink can be estimated.

is the surface temperature of the plate

is the ambient air temperature

acceleration due to gravity

is the kinematic viscosity of air evaluated at Tavg

is the thermal diffusivity of air evaluated at Tavg

is the thermal conductivity of air evaluated at Tavg

Accounting for multiple LEDs
If multiple identical LEDs are being cooled by the heat sink and they are spaced very close to one another then a reasonable approximation is to assume that the LEDs are equivalent to one single large heat source as shown if figure 2. The heat source should have an area that is equivalent to the sum of the areas of the LEDs that are in contact with the heat sink.  The equivalent interface (Rint-eqv) and junction to case thermal (Rth-jc-eqv) resistances for the single equivalent heat source need to be calculated as shown in equations 8 and 9. 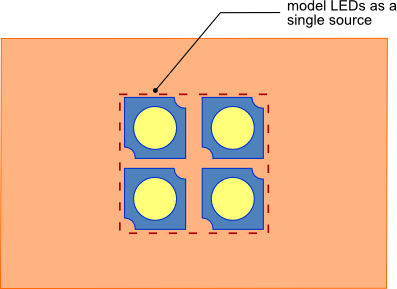 is the thermal interface resistance of single LED

is the junction to case thermal resistance of single LED

is the number of LEDs

An online heat sink calculator based on the calculation methodology described in this blog post is available free of cost. Click the following link to access the calculator: Flat Plate Heat Sink Calculator