is the surface temperature in Kelvin

called emissivity. The value of

is between 0 and 1. The emissivity is a measure of how well the surface radiates heat compared to a blackbody.  Values for common heat sink surface finishes and materials are shown in table 1.

When two or more surfaces are involved, radiant energy is absorbed and emitted by each surface. One of simplest forms of radiation exchange is in the case of a surface in a much larger enclosure. The surface is at a higher temperature than the enclosure, with a surface area A and emissivity

.  In this scenario the net rate of energy exchange due to radiation is given by equation 1. See figure 1.

Figure 1. Radiation exchange between a small heated surface and the inside of a large enclosure

Because a heat sink consists of several surfaces that absorb and emitted radiation to each other and the enclosure, the equations that represent those interactions are not as straight forward as equation 1. However the general principle represented in equation 1 still apply. A thorough explanation of the radiation calculations and corresponding equations for a plate fin heat sink can be found in [1].

is the length of the heat sink 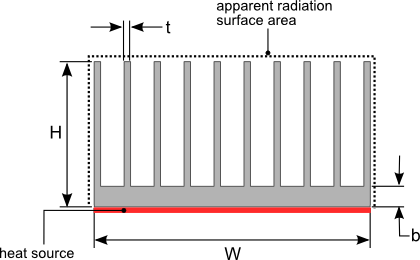 The heat (power) dissipation from a heat sink to its surroundings is by two means, radiation and convection. The heat dissipation due to convection is given by equation 4.

is the convection coefficient

is the ambient air temperature

The percentage of heat dissipated via radiation is significantly higher in natural convection. In the example presented the percent radiation dissipation is close to or above 30%. The rate of heat loss via natural convection is also highly dependent on the surface temperature of the heat sink. This explains the rise in percent radiation dissipation with a decrease in source temperature. When the surface emissivity is reduced to 0.09 the impact to the heat sink temperature is almost 30°C.

The examples presented highlight the importance of radiation in the cooling of a heat sink. Although radiation has a smaller impact on cooling a heat sink in forced convection its effects can still be relevant if a few extra degrees are need to ensure that the product meets the specification. It is evident that the role of radiation for a heat sink cooled via natural convection is extremely important. Significant decreases in temperature can be achieved by simply modifying the heat sink surface by anodizing or painting to increase the value of the surface emissivity.