The optimum design of heat sinks particularly in high heat load devices such as MOSFETs and IGBTs is essential for the efficient operation of these devices and to avoid premature part failure. The use of fans in combination with heat sinks are required to provide adequate cooling for high power devices with significant heat dissipation.

A shroud or duct is often used to channel the airflow from the fan into the heat sink as shown in figure 1 to prevent any bypass of airflow around the heat sink which would decrease the effective cooling capacity of the fan and heat sink combination. 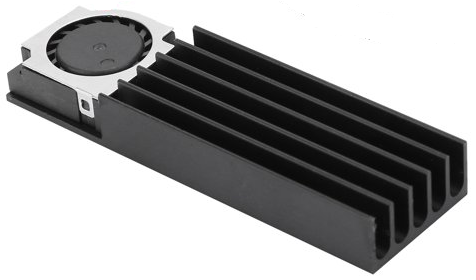 Figure 1 Heat sink and blower fan with no bypass flow

A straightforward calculation of the optimum fin spacing, and the resulting thermal resistance of the fan/heat sink combination shown in figure 1 can be conducted with a few equations allowing for a quick estimation of the heat sink size required for your application. 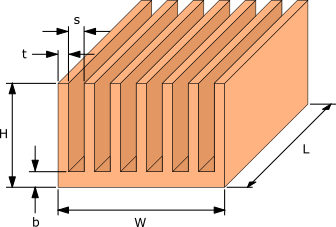 is the air velocity between fins

is the volumetric flow rate into the heat sink

is the height of the fins

is the spacing between fins

is the number of fins

The smaller the fin spacing, s the higher the velocity of air, Vf flowing between the fins. The higher the air velocity the more effective the cooling of the fins. If you were to try to optimize the heat sink dimensions the spacing between the fins would be a very small value since the air velocity and hence rate of cooling increases with decreasing fin spacing. In real world applications the flow is supplied by a fan or blower. The flow rate would not be fixed, it would be limited by the increase in pressure drop across the heat sink that would occur as the spacing between the fins, s decreases.

To simplify the analysis without introducing significant calculation errors the following assumptions will be made.

The assumption of laminar flow through the heat sink holds true for a large majority of commercial heat sink/fan combinations. Fan noise is a major consideration in electronics products as such fan speeds are intentionally kept lower to avoid significantly increasing the noise level which can occur as the flow transitions from laminar to turbulent.

The first step in designing a heat sink is to determine the operating point of the fan and heat sink combination. When a fan or blower is paired with a heat sink the performance of the fan will depend on the design of the heat sink. 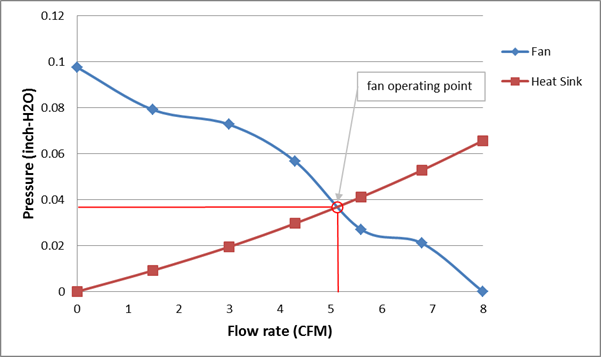 is the maximum fan pressure drop

The equation for the pressure drop across the heat sink is given by equation 3.

The density of the air ρ is calculated the at the ambient air temperature.

The hydraulic diameter of the passage between the fins Dh can be approximated as 2s.   The variables Kc and Ke are the pressure loss coefficients due to the constriction and expansion respectively of the air as the flow enters and exits the heat sink. Equations for these pressure loss coefficients are a function of the frontal area σ=s/(s + t) and are based on graphs provided in reference 1.

The apparent friction factor fapp is based on a model developed in reference [2].

, is the Reynolds number in which ν is the kinematic viscosity.

term in equation 6 accounts for the friction factor due to fully developed flow between the fins of the heat sink. Fully developed flow occurs in very long channels or slower flow in which the velocity profile of the flow remains constant.

To determine the operating point of the fan/heat sink (i.e., the intersection of the fan and heat sink pressure/flow rate performance curves) equation 2 and 3 are equated and the unknown variable

The spacing between the fins that provides the maximum rate of heat transfer, sopt is calculated using equation 9 in which μ and α are the viscosity and thermal diffusivity of air respectively. This equation was developed by Bejan et al in reference 3.

and it is this flow rate that influences the rate of heat transfer from the heat sink.

Equation 9 is substituted for the fin spacing, s in equation 8 and then the flow rate of the system is determined by solving the resulting equation for

Note that even though ΔPfan and ΔPhs are equal when equation 8 is solved, only equation 2, ΔPfan should be used in equation 9 when solving for

. Equation 3 for ΔPhs is dependent on the fin spacing, s therefore using ΔPhs in equation 9 to solve for the flow rate is mathematically intractable.

With the flow rate,

and flow velocity through the fins, Vf known from the solution of equation 8, the rate of heat transfer from, and the thermal resistance of the heat sink can now be determined.

The average heat transfer coefficient, hf from the heat sink fins is calculated using equations 10, 11, 12, 13 and 14, developed in reference 4.

Where k is the thermal conductivity of air.

Pr is the Prandtl number for air. A value of 0.71 can be used for the typical temperature ranges at which a heat sink used in electronic cooling operates.

The total thermal resistance of the heat sink, Rhs is then:

The wetted surface area of the heat sink Ahs is the area in contact with the air flowing through the heat sink.

Check out our post Sizing heat sinks using a few simple equations for an explanation of the calculations used for optimizing and sizing heat sinks cooled via natural convection.