Equations 4 and 5 calculate the temperature rise at any point, P on the infinite surface measured radially from the center of the heat source, to a distance d as depicted in figure 2. 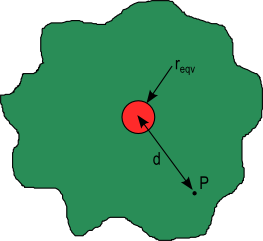 Qs is the heat generated by the heat source that flows into the PCB and t is the thickness of the PCB. The constants C1 and C4 are calculated from equations 7 and 8. Variables I0, K0 are modified Bessel functions of the first and second kind respectively, of order 0 and α is given by equation 6.

is the Bessel function of 1st kind, of order 1

is the Bessel function of 2nd kind, of order 1

is the effective convection coefficient 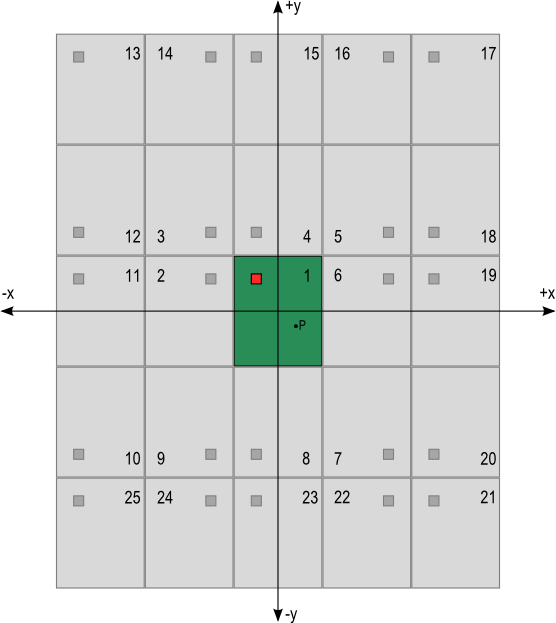 Equations 9 through 17 are the distances from the center of the heat sources in the first mirroring operations (plates 1 through 9) to a point P on the center plate, plate number 1. The x and y variables with subscripts s and p are the coordinates of the mirrored heat source and the point P respectively referenced from the coordinate axes shown in figure 3.

The temperature rise for each source at the corresponding distance d is calculated using equations 4 through 8. The resulting temperature rise values are added together to determine the temperature rise  ΔTP at the point P as shown in equation 18. The procedure is similar as the number of mirrored heat sources are increased.

The subscript N is the number of mirrored heat sources including the heat source on the center plate.

Equations 4 through 7 assume heat transfer is taking place from only one side of the PCB. To evaluate cooling from both sides of the PCB the effective convection coefficient heff is multiplied by 2.

is the external ambient temperature

The junction to board thermal resistance, θjb is a tested value provided by the component manufacturer. 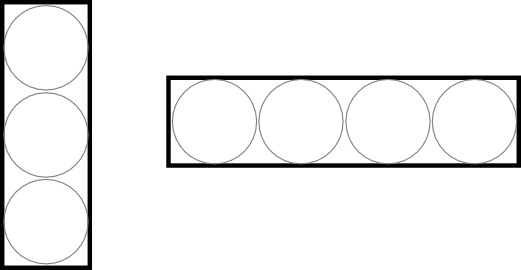 The first step to estimate the temperature rise of a trace is to determine the heat generated by the trace, Ptrace.  This is calculated using equation 21.

The resistance, Rtrace of the trace is temperature dependent and is given by equation 22 and I is the current flow through the trace.

is the resistivity of the conductor material at Tref

is the length of the trace

is the cross-sectional area of the trace

is the temperature coefficient of resistivity for the trace material

is the reference temperature of the trace material’s resistivity

is the average temperature of the trace

Typical values for copper traces at a reference temperature of at 20°C are:

Note, equation 22 does not calculate power loss caused by skin effects typically seen in high frequency applications. Because the thickness of most traces are very small the skin effect is pronounced only at extremely high frequencies.

The most accurate method to determine the trace temperature is to analyze the trace using multiple circular heat sources as shown in figures 2 and 4 and described in the previous section. For relatively short traces the number of calculations needed are manageable if using a spreadsheet since a reasonable number of circular heat sources can be used to approximate the entire trace. For long traces a simplified method can be used to provide a good estimation of trace temperature. 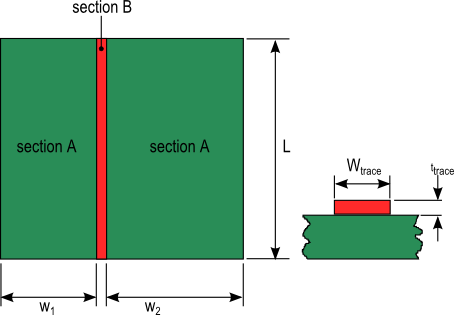 η1 and η2 are extended surface efficiency values that are calculated using equations 24 and 25 respectively. Areas A1 and A2 are the rectangular areas of section A corresponding to w1 and w2.

where m is given by:

The calculation process explained previously is used to determine the junction temperature rises of two MOSFETs mounted to a 300mm X 300mm PCB with a thickness of 4mm. The MOSFETs are labeled A and B in figure 6.  Table 1 lists the size, location, heat loss and junction to board thermal resistances for the devices. 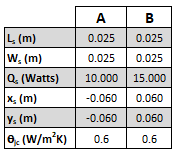 Table 1. Parameters for the MOSFETs attached to the PCB temperature rise calculation example

All of the heat loss is assumed to be conducted into the PCB. The PCB is cooled via natural convection and radiation from the top and bottom surfaces with an effective convection coefficient, heff of 15 W/(m2K). The effective thermal conductivity, keff of the PCB is 54 W/(mK). 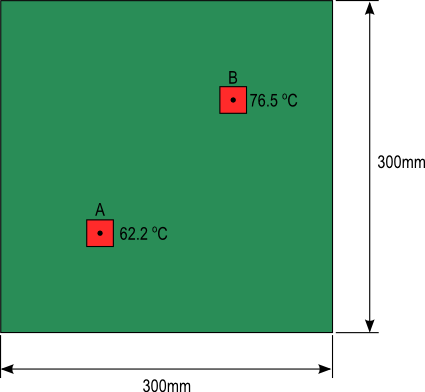 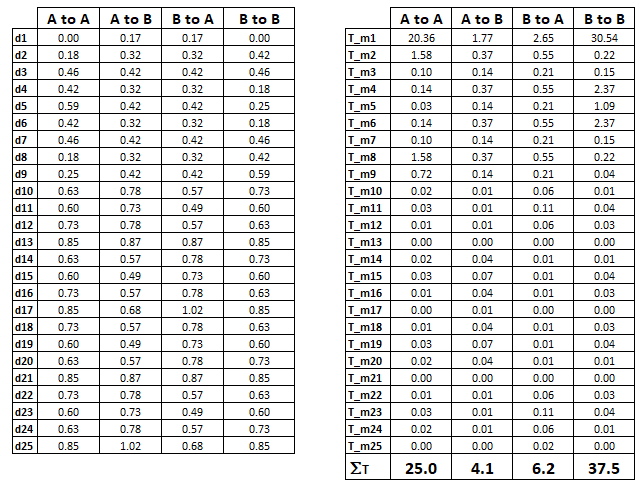 The first table contains the calculated distances of the mirrored heat sources for 2 mirroring operations to the center of the MOSFETs A and B. The second table uses the corresponding distances to determine the temperature rise due to each mirrored source at the locations of the MOSFET’s. The temperature values in each column are summed. The sum of the values in column “A to A” are added to that of column “B to A” to determine the temperature rise of surface of the PCB located beneath MOSFET A. Equation 20 is then used to calculate the junction temperature of the MOSFET A.  The same is done with columns “A to B” and “B to B” to calculate the junction temperature of MOSFET B.  The results are shown in figure 6.

An online calculate that will estimate the temperature rise of a PCB and the junction temperature of a component attached to the PCB is available free of cost. Click the following link: PCB Temperature Calculator